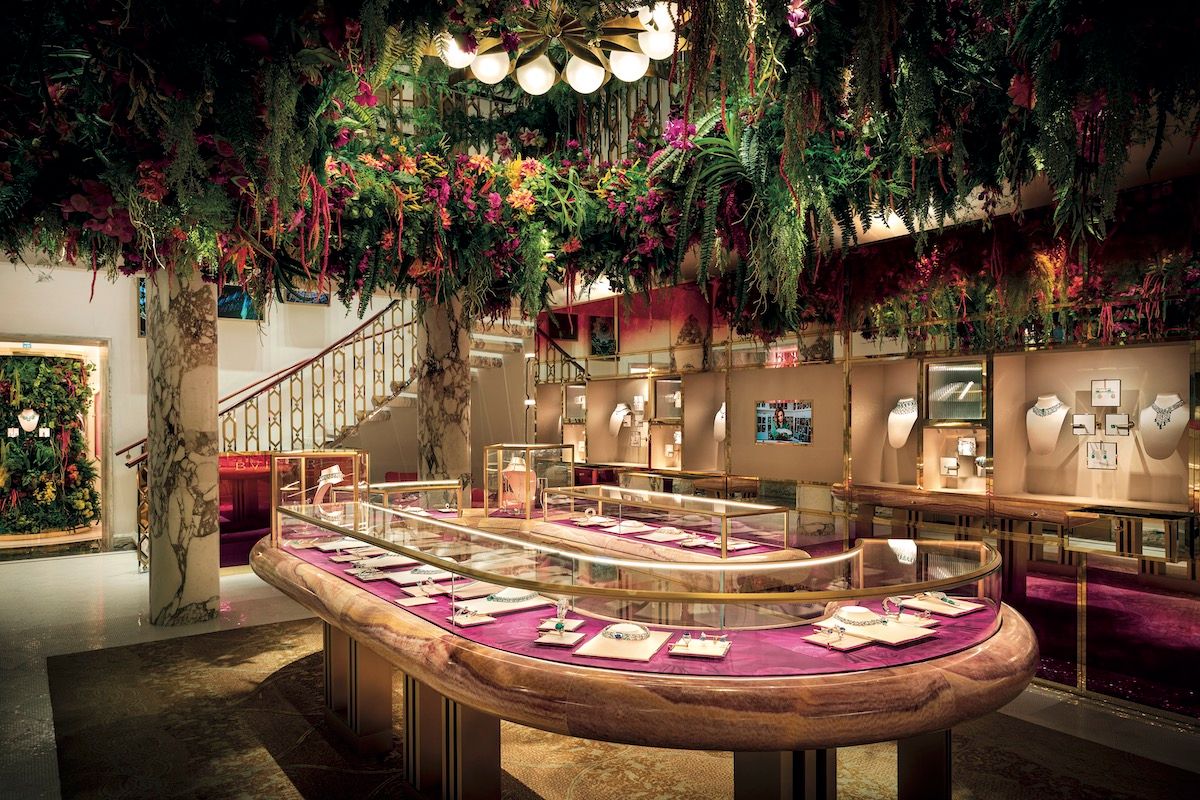 Outdoing itself in innovation and creativity has never been the question for Bulgari, as Yanni Tan finds out at the Paris launch of the new garden-themed high jewelry collection.

Late spring in the fashion capital of the world ushered in a new wave of activity not seen since the days of Covid. Tourists were once again flocking to Paris, boutiques and cafes were bustling, and on Place Vendôme, the global epicenter of fine jewelry, Roman jeweler Bulgari is taking its rightful place among the French-born glitz of historic jewelry brands.

Those familiar with the City of Lights will already know that the cobbled square that stands out with an imposing bronze column by Napoleon is where generations of royals and wealthy patrons have passed through since the late 19th century, at the search for the most beautiful creations of precious stones. Arguably, another chapter in the history of Place Vendôme began with the opening of Bulgari‘s new flagship store last July.

Situated in a prominent location at the northern end of Place Vendôme, this “temple” of wonderland is the creative brainchild of none other than Peter Marino, who spearheaded the massive renovation project. With four artisan laboratories, he expanded the original space overlooking rue des Capucines by 50% over two 17th-century palaces, redesigning and restoring it in accordance with the strict regulations of France’s historical monument department. .

Now, with an entrance overlooking the square’s Napoleonic column, inspired by Trajan’s Column in Rome, Bulgari’s Roman connection to its historic twin city is complete. And it is here, at 23 Place Vendôme, that the magic of a very exclusive group of media whose Prestigebegan.

Imagine the sun’s rays from 13 windows and various skylights flooding the boutique’s cream, walnut-wood and marble interiors, casting what appears to be the golden glow of the Eternal City onto the jewels within. Luckily for us, the ones on display were from the latest Bulgari Eden high jewelry collection: Garden of Wonders. The view was simply stunning.

From the Place Vendôme entrance, we walked through a vaulted corridor flanked by Italian marble columns, as well as display cases and niches lined with apricot-colored silk. A small garden oasis sprouted in a small round domed room, lit by a 20th century Italian chandelier, before the main living room with two-story ceilings and a grand staircase appeared before us. Passing by security personnel and editors around the world, we feasted on not just jewellery, but the true art of jewellery.

The Bulgari Eden collection totaled over 140 pieces – not that we counted, as it was impossible not to feel overwhelmed by all this splendor in a wondering silence akin to the hushed ambience of a grand Roman museum. There are three major sub-themes: nature, homage to Paris and the Serpenti – which intersect to demonstrate the house’s show of force.

nature in his blood

While Bulgari has always been known for its colorful, voluptuous gemstones and vivid expressions of nature inspired by Roman gardens and the Mediterranean, this new collection takes its mastery of creativity and craftsmanship to the next level.

Here, the dynamism and lushness of nature are not imitated, but interpreted with aplomb. For the first time in Bulgari’s history, more than 30 creations are dedicated to the extraordinary emerald, as dear to the house as late Cleopatra star Elizabeth Taylor (famous for her Bulgari emerald and diamond jewelry) is obsessed with. the brand.

The Emerald Glory necklace, which is set with 11 pear-shaped Colombian emeralds among a cascade of diamonds, drapes over the skin with the softness of lace despite its total weight of over 220 carats. No less than 3,000 hours were needed to make this transformable piece, equipped with a removable neckband and which can be worn as a necklace or a tiara.

The Emerald Venus necklace, whose irregular design is inspired by the Capelvenere, a type of Mediterranean fern whose Italian name translates to Hair of Venus, is also a demonstration of Bulgari’s flair for imagination and creativity. Branches and finials of emerald and diamond beads radiate outward from an impressive 20-carat octagon-cut Colombian emerald.

What Italian home could resist the lure of the country’s famous coastline? This time, a rare 107.15-carat cushion-cut Sri Lankan sapphire is featured on the Mediterranean Reverie necklace, which Bulgari says is one of the most precious ever made. The intense but transparent blue of the stone immediately evokes the hues of the sea grotto of the Blue Grotto of Capri. What looks like shimmering droplets of seawater on the chain are baguette-cut sapphires and multi-cut diamonds set in platinum.

“Only Paris is worthy of Rome; only Rome is worthy of Paris” went the motto, when the two cities were officially twinned in 1956. It therefore seems normal that the emerald dear to the house should once again be the star of the Tribute to Paris necklace, which pays homage to the new shop shop. host city and celebrates the artistic link between the two destinations.

The result of 2,000 hours of painstaking work, the masterpiece features a stunning 35.53-carat oval-shaped Colombian emerald surrounded by exquisite encrustations of emeralds and diamonds evoking the slender silhouette of the legendary Eiffel Tower. Balancing movement and weight, Bulgari craftsmen have delivered a necklace that is harmonious, supple and light, despite the number of precious stones.

Being a longtime fan of the Bulgari Serpenti, it was hard to contain my excitement for the many new iterations of the house icon. Time and again, the snake sheds its skin to reveal a startling new silhouette, fascinating pattern and tactile texture.

Crafted in rose gold and diamonds, the Serpenti Spinel Embrace necklace wraps its tail around a 25.70-carat drop-shaped pink spinel from Tajikistan. The reptile is streaked with rows of multi-cut diamonds set on an elegantly twisted body. Unbelievable? You bet.

Another first for Bulgari is the design of a pair of snakes merged into one – on the Serpenti Ocean Treasure necklace. Coiling sensually around each other, the serpents of platinum and diamonds merge into a single entity and hold an exceptional 61.30 carat drop-shaped Sri Lankan sapphire from its mouth.

Another double snake design features what looks like sea kraits coiled languidly on top of each other. Their beaded rose gold segments are encircled with diamonds and rubies, and enhanced with even rounder rubies. Sensational is far from describing the finesse with which these creations have been given realism and movement by Bulgari’s master craftsmen.

From this exhibition alone, it looks like the house is once again making a very emphatic statement about its extensive jewelry-making vocabulary. In an interview in one of the Parisian flagship’s second-floor private salons, Bulgari veteran and chief executive of its jewelry division Mauro Di Roberto says this collection is the most important since the pandemic hit. “The Bulgari Eden: Garden of Wonders theme is our most elaborate collection to date, and it resonates with this renewed will and positive mood – and the jewelry shows it. Green, the color of our emerald showcases, represents the hope.

What’s really impressive is the cross-pollination of design codes through sub-themes and the reimagining of existing house symbols. Some more abstract pieces appear to bear the Serpenti scale shape, while some finials that are a mainstay of Bulgari iconography are rejuvenated with new combinations of colors and gemstone shapes. Di Roberto adds: “You also realize how 3D the designs are. The combination of stone quality, design and craftsmanship gives soul to our jewelry. They come to life. »

Nevertheless, each creation is firmly Bulgari in its DNA – as any jewelry lover can tell. Di Roberto concedes that the brand is upping the ante in today’s highly competitive climate: “The pressure is a stimulus. We don’t want our ability to go unnoticed. We have a major high jewelry workshop in Rome, and this collection is a very diverse exercise of our art – re-cutting stones and putting them together in different ways, using more baguettes of diamonds and turning them into works of art that can be Ergonomically worn. . It’s extremely tedious, but we’re pushing it.

The Paris launch also coincided with the announcement of Hollywood star Anne Hathaway joining Zendaya, Lalisa Manobal and Priyanka Chopra as Bulgari Global Ambassadors. Their faces, personalities and talents are as diverse as the loyal and new generations of patrons of Bulgari. “What’s happening is evolution. From when I was living in Singapore where I was responsible for the Southeast Asian market from 1995 to 1998, things have changed quite a bit. Today oday, the young Asian clientele is more sophisticated and appreciates our work more than 20 years ago.While our fine jewelry buyers are generally between 30 and 45 years old, in China the age is lower.

If Bulgari continues on the path of showcasing its heritage, its creativity and its brand image, whatever the launches of the Roman house, even if they were capsule collections for the West, they will be adopted by the East – as its experience has shown. Ultimately, says Di Roberto, beauty is a common language.

This point was highlighted during the brand’s sumptuous VIP gala dinner, to which we were invited, at the Italian Embassy in the 7th arrondissement of Paris. Local fans waiting to see Bulgari’s global ambassadors lined rue de Varenne, erupting in near-hysteria when Lalisa of K-pop girl group Blackpink arrived, while international media clamored for a slice of her.

During the pre-dinner runway presentation, Carla Bruni, the former First Lady of France who also happens to be a former Bulgari glamor girl, made a special appearance on the catwalk. Adorned with the shimmering Tribute to Paris necklace, the ageless celebrity took our breath away, just as she did at the Bulgari Diva high jewelry event in Paris I attended nearly a decade ago. It’s the perfect reminder – that even if some things change, what really is the heart of the house will always remain the same.

This story first appeared in the August 2022 issue of Prestige Singapore.