Shanaya Kapoor may not have made her Bollywood debut yet, but her public appearances have been nothing short of glamorous. In fact, her off-duty style record has been a fashion inspiration. Plus, with the right tips, her classic looks are pretty easy to recreate. This time, she paired brown cargo pants with a white Abercrombie & Fitch fitted top and Nike shoes. She completed the look with her Louis Vuitton bag. Scroll for a closer look at Shanaya’s latest airport look.

Shanaya Kapoor was recently spotted at Mumbai airport with her entire family. The actress stopped and posed for the cameras and grabbed MAJOR attention for her casual yet chic look. Shanaya’s look consisted of a fitted white top from Abercrombie & Fitch that featured a functional button down neckline, an embroidered logo on the left chest and elongated sleeves. She decided to pair it with brown cargo pants with a relaxed fit. The pants feature multiple functional pockets and are definitely streetwear inspired. She completed the look with a pair of black and white Nike Dunk sneakers. However, the highlight of her outfit was the Louis Vuitton Montsouris PM.

The stylish Louis Vuitton Montsouris PM by Shanaya which is worth around Rs. 2,23,248 is made of the iconic LV Monogram canvas and cowhide leather and features a Louis Vuitton buckle as well as leather cords. The bag is certainly beautiful but it is just as practical with its spacious interior and practical external zipped pocket. It’s definitely the perfect travel companion. The actress opted to keep her makeup to a minimum and was spotted wearing a pair of black shades. 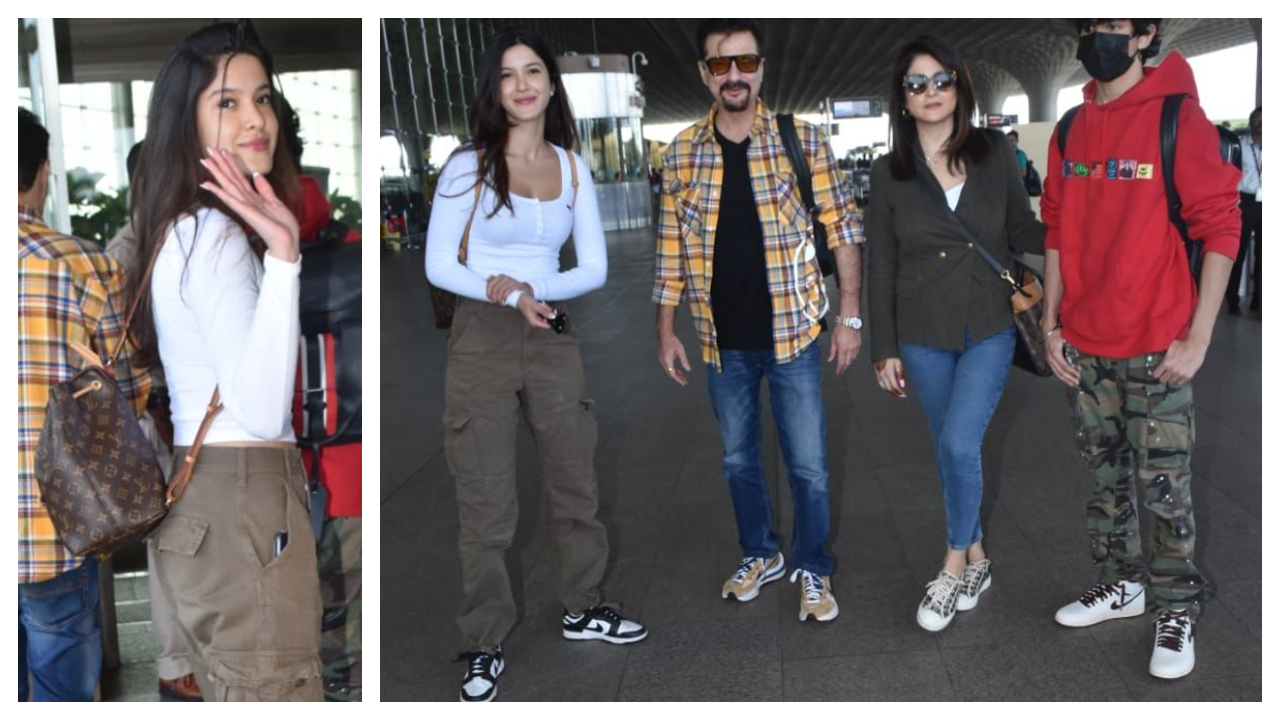 While the newcomer has always had her airport style on point, this time she walked with all of her family who also looked dapper. Sanjay Kapoor was spotted in a plaid shirt paired with a comfortable pair of blue denim and trainers while Maheep Kapoor was spotted in a black blazer paired with a pair of skinny blue denim. Jahaan Kapoor decided to go with a comfy red hoodie and a pair of military print cargos.