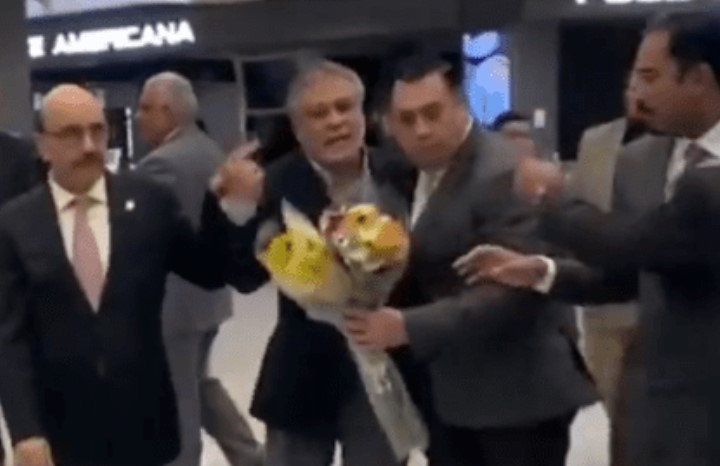 Pakistani minister heckled at US airport leading to abusive altercation

Ishaq Dar, Pakistan’s new finance minister, was heckled by Pakistanis living in the United States upon arrival at Washington DC airport on Thursday, October 13. The indignant crowd started laughing at him and shouting “chor! chor!” and “thief!” at the airport after landing in the American capital, leading to an abusive altercation between the crowd and the minister and his collaborators.

The minister is on a travel in the United States to attend the annual meetings of the World Bank (WB) and the International Monetary Fund (IMF). The PMLA minister was accompanied by Pakistan’s Ambassador to the United States, Masood Khan, the Governor of the State Bank, the Finance Secretary and other ministers and officials.

In video of the incident which has now gone viral on social media, Ishaq Dar is seen being greeted by a ‘chor chor’ as he walks out of the airport. In her retort, Dar said, “You’re a liar.” The minister, who looked visibly irritated, told people who were making fun of him to shut up. He then began to walk away, when someone in the crowd called him a “liar” again.

At this point, another man, apparently a member of Dar’s entourage, could be seen exchanging profanities with the hecklers.

“Hey, shut your mouth. Do not scream. I’ll fuck you here mother f**ker.. you don’t know me.. you mother f**k*r, don’t try to be a smart *k yourself,” the assistant shouted of the Pakistani minister in retaliation.

It is however not the first time that a Pakistani minister has been mocked in public while traveling abroad or within the country. Marriyum Aurangzeb, the information minister, was heckled in a London cafe last month. Previously, PTI supporters harassed Planning and Development Minister Ahsan Iqbal in a restaurant.

During a three-day visit to Saudi Arabia in April, a group of Pakistani pilgrims assaulted, heckled and shouted slogans at Prime Minister Shehbaz and his entourage at the Masjid-i-Nabwi in Medina.