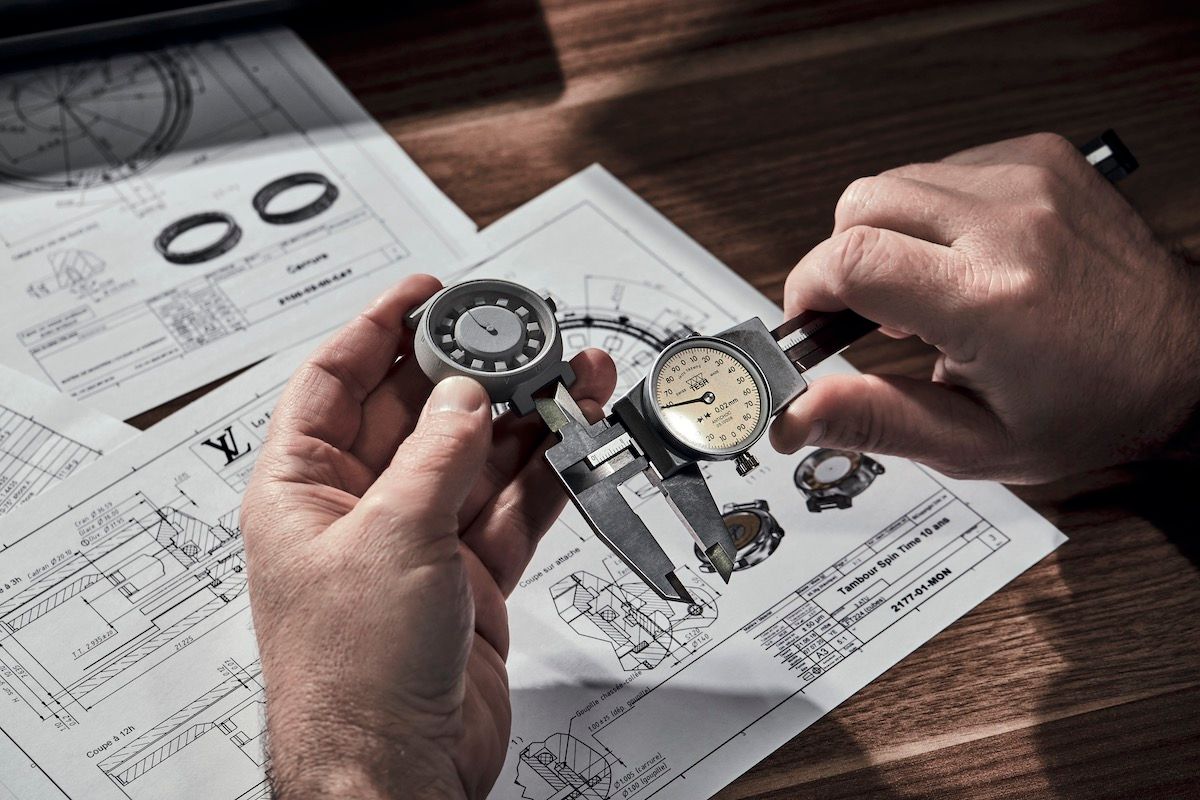 Among the fascinating novelties presented by Louis Vuitton in Bangkok, three of the latest timepieces stand out with their dazzling rainbow hues. Crystal Lee reports.

The first Tambour catapulted Louis Vuitton into the world of watchmaking. Launched in 2002, the now iconic watch, whose name means drum in French, featured a unique case design inspired by the percussion instrument. Carved from a block of metal, it was round, bold and sturdy, with the 12 letters that make up the house name engraved on the case lip, marking each hour.

Over the past 20 years, the Drum has gone through multiple iterations. Each a horological marvel housing highly sophisticated proprietary movements, some of the revolutionary complications in the Tambour range include Spin Time, in which cubes spin to display the hours; the GMT Minute Repeater with second time zone and skeletonized dial; as well as the Escale Worldtime which displays the 24 time zones at once.

This year, Louis Vuitton is expanding the range with new references, two of which feature vibrant rainbow hues to delight color lovers. The Tambour Spin Time Air Vivienne hypnotizes with 12 tiny Viviennes, the house mascot, each sporting a different color. Every 60 minutes, a Vivienne switches to her neutral side, while the next Vivienne turns to her profile to indicate a new time.

To support Vivienne in her dance, the caliber LV 89, housed in the center of the case between two sapphire crystals, gives the impression of floating. The adorable miniature figurines are framed by assorted colored gemstones on the rim, such as tsavorites, diamonds, sapphires, rubies and amethysts. A Monogram flower encrusted with diamonds on a disc in the center of the dial adds even more sparkle.

Another Tambour timepiece injected with a kaleidoscope of colors is the Tambour Moon Mysterious Flying Tourbillon. Modernizing the mysterious 19th century concept, Louis Vuitton’s watchmaking manufacture, La Fabrique du Temps, has arranged the watch’s caliber LV 110 – along with its intricate system of sapphire crystals – in a vertical line that gives the impression that everything the movement is levitating in the case. Hidden under the Monogram flower at 12 o’clock hides a coaxial double barrel which gives the watch an impressive power reserve of eight days. The signature floral motif is also integrated into the openwork tourbillon cage. An array of sparkling stones including amethysts, sapphires, rubies, spessartites and tsavorites encircle the movement, illuminating the otherwise austere timepiece. And, as with many Louis Vuitton accessories, the back of the tourbillon carriage can be personalized with an inscription of the owner’s initials.

Besides the Drum, the lovely Vivienne Bijou Secret also gets the happy rainbow treatment. Testimony of Louis Vuitton’s watchmaking and gem-set expertise, this object of desire attracts attention despite its delicate shape, with its sparkling diamond eyes, rose gold face and petals set with sparkling diamonds, spinels, sapphires and rainbow-hued tsavorites. Rotate Vivienne’s head to cover or reveal a 21mm watch with a mother-of-pearl dial. Precious and enigmatic, the Vivienne Bijou Secret brings new brilliance to the watchmaking and jewelery heritage of Louis Vuitton.

This story first appeared in the August 2022 issue of Prestige Singapore.