Hermesthe French luxury company with a market cap of 142 billion euros ($162 billion), sued the artist, digital creator and NFT creator Mason Rothschild, who designed the MetaBirkins works of art protected by NFTs. The litigation was filed in the United States District Court for the Southern District of New York on January 14, 2022.

Hermes accuses the creator of the NFT of being “a digital speculator looking to get rich quick by appropriating the METABIRKINS brand to create, market, sell and facilitate the exchange of digital assets known as non-fungible tokens (NFTs).“He continues that the”The METABIRKINS brand simply rips the famous BIRKIN brand from Hermès by adding the generic prefix “meta” to the famous “BIRKIN” brand.“.

Indeed, Hermès has a long list of brands, and the NFTs most certainly show Birkin-type bags. The designer has created 100 digital faux fur handbags as a “tribute to Hermès’ most famous handbag”. Some of the digital assets were resold for over $40,000 and according to NFT Rarible Marketplace, the collection fetched over $1.2 million.

Rothschild, instead, made a statement claiming that the METABIRKIN designs are simply a creation of art. 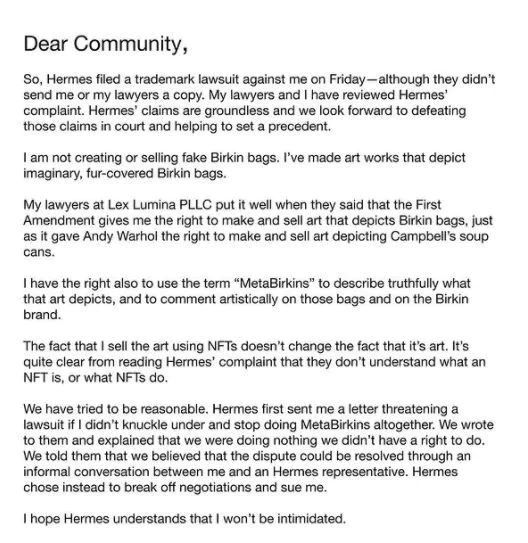 In mid-December, Hermès sent a cease and desist letter to Rothschild and persuaded OpenSea to remove the NFT listings. A long list of brands was attached to the letter, with the term “Hermès” covering almost all classes, but not all digital products.

Regarding the Hermès brand, a class has been deleted regarding “images, sounds and electronic data relating to clothing, footwear, handbags, watches”, etc. Cancellation refers to a lack of evidence of continued use. 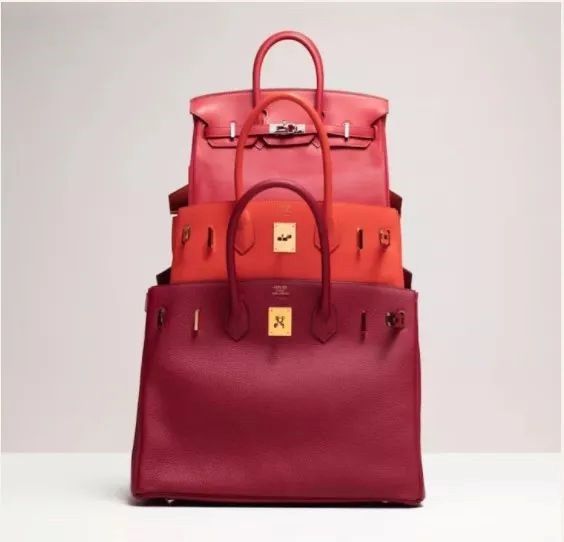 The Birkin brand is much narrower and relates to handbags that appear to be physical handbags. However, this includes the design of the handbag, which could very well be a problem for Rothschild. 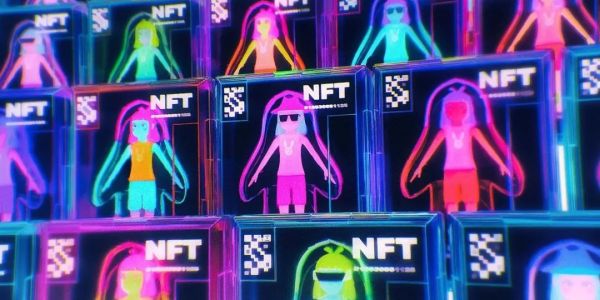 We would also like to touch on the technical side a bit. In addition to claiming trademark infringement citing infringement on “Hermès” (on several classes), “BIRKIN” (on class 18) and the trade dress of the bag, Hermès also claimed unfair competition under 15 U.S. Code § 1125(a)1 and 15 United States Code § 1125(c)2. We believe this is the miscellaneous protection claimed by Hermès for the reasons below:

The trial has just started and we will wait to see that it plays out in court. Fashion brands and others companies interested in cryptocurrencies and NFTs should be aware that they need adequate brands covering digital goods, and they should also be creative going through a situation similar to that of Hermes.

(A) is likely to confuse, or cause error, or to mislead as to such person’s affiliation, connection or association with another person, or the origin, sponsorship or endorsement of its goods, services, or business activities by another person, or

(B) in commercial advertising or promotion, misrepresents the nature, characteristics, qualities or geographical origin of its or another person’s goods, services or business activities, shall be subject to civil action by any person who believes that he or she is or is likely to be harmed by such an act.

2 Subject to principles of equity, the proprietor of a mark with a reputation which is distinctive, by nature or by acquired distinctiveness, is entitled to an injunction against another person who, at any time after the proprietor’s mark is become famous, begins to use a mark or trade name in trade likely to cause dilution by blurring or dilution by tarnishing of the famous mark, regardless of the presence or absence of actual or probable confusion, competition or real economic damage.

The content of this article is intended to provide a general guide on the subject. Specialist advice should be sought regarding your particular situation.