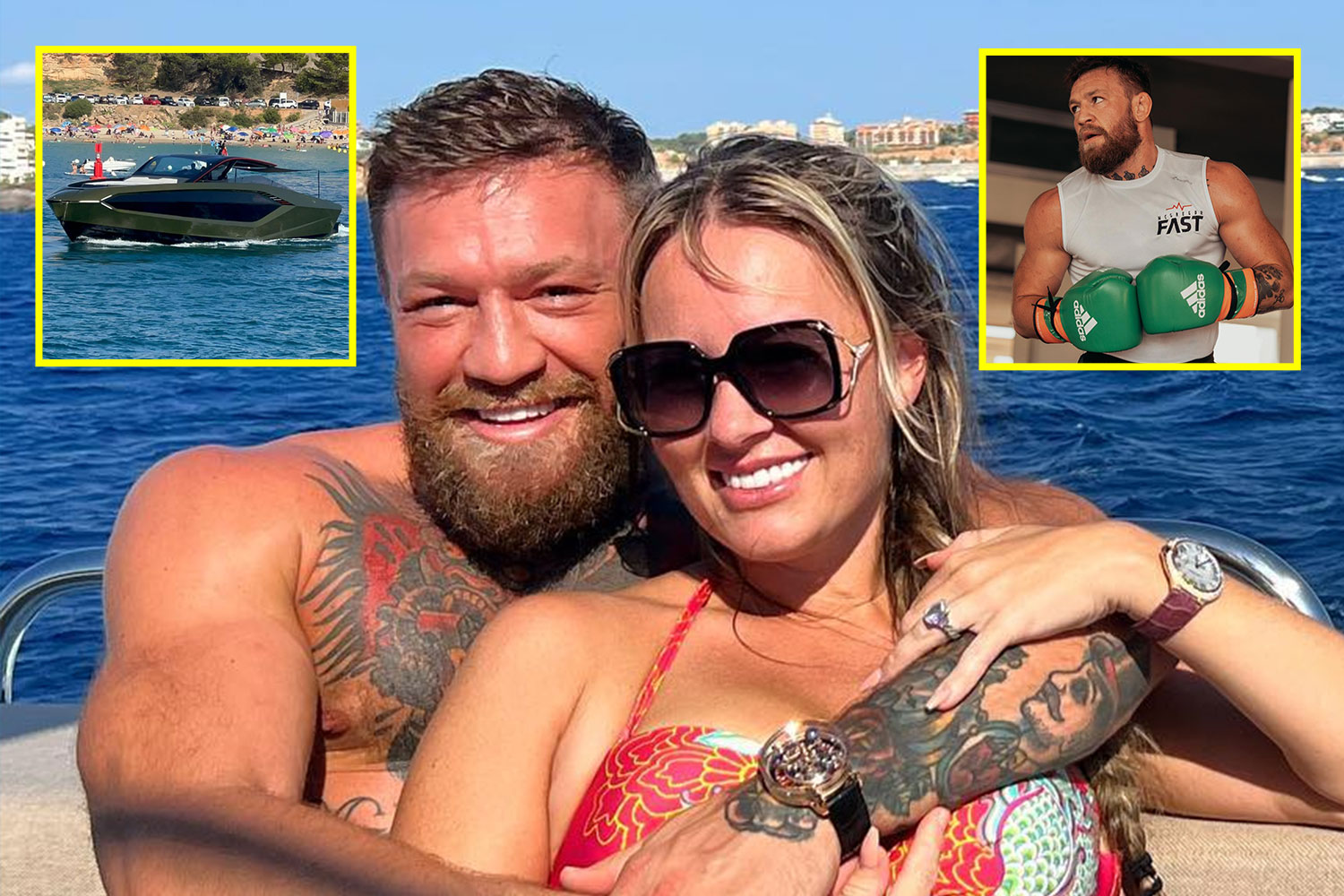 Inside Conor McGregor’s life at sea with £700 Hermès ashtrays, Versace ‘yacht shoes’, water slides, Cartier watches and some serious gym work on his Lamborghini boat as he approaches his return

Conor McGregor has made his superyacht Lamborghini a home away from home since spending nearly £3million on his most extravagant purchase yet.

“Notorious” is currently healing after fracturing his tibia and fibula at UFC 264 in July 2021 and is expected to return later this year or in the first quarter of 2023.

Immediately after his catastrophic leg injury, McGregor bought the limited edition Lamborghini Tecnomar 63 which was built by Italian Sea Group headquarters in Italy, with prices starting at (£2.55m).

After almost a year of waiting, McGregor finally took possession of the ship in May and since then he and his family have apparently started living at sea.

‘Mystic Mac’ and co. spent much of their time in the south of France for an epic month that included partying with Kylie Minogue

at a movie premiere, meeting Jared Leto and attending the Monaco Grand Prix.

McGregor is getting very comfortable on his superyacht and it’s easy to see why, as he wears Versace loafers, uses a $700 Hermes ashtray and, with the help of the onboard gym facilities, stays in shape.

During his time away from fights, the MMA legend has been seriously beefing up with the goal of returning to welterweight with the goal of becoming the first three-weight champion in UFC history.

UFC 2022 schedule: Every upcoming fight, including Usman vs. Edwards at UFC 278

Although life at sea doesn’t seem to lend itself to a high-level sporting career, McGregor makes it work. Not only does he stay shredded lifting weights on board, but he also uses his time off the boat to hit the pads and prepare for his comeback.

The Irishman is spending time with his three kids who seem to love ocean life, which includes more time than ever with dad and lots of fun activities including an inflatable water slide which is often attached to the boat.

McGregor spent his last Father’s Day on the boat as he, his fiancée Dee Devlin and their three children all spent the night at their second home for the very first time.

The former two-weight UFC champion recently celebrated another big occasion on board as his longtime partner turned 35 and the pair celebrated in typically epic fashion.

In the morning they enjoyed what appeared to be a delicious breakfast accompanied by a flower arrangement wishing Devlin a happy birthday – she looked delighted with the gesture.

McGregor then gifted his 20-year-old partner a luxury Cartier watch before heading ashore for a romantic dinner and continuing the celebrations.

Devlin even has a new tattoo, which is her name mixed with a heart trace and a love heart.

Game time will soon be over for McGregor as he’s set to start a new gig after accepting a starring role alongside Jake Gyllenhaalin in Amazon Prime’s new reimagining of the 1980s classic Road House. which is expected to begin filming in the Dominican Republic later. this month.

After completing his acting debut, the wrestling star promised he would deliver the “biggest and greatest” comeback in sports history by fulfilling his three-belt UFC dream.

A number of opponents are said to be in the mix for his comeback, including Jorge Masvidal, Nate Diaz and welterweight champion Kamaru Usman.

Lillian White to play Hermès in ‘Hadestown’ on Broadway ⋆

CSW Industrials, Inc. (NASDAQ:CSWI) is expected to post earnings of $0.86 per share in the third quarter of 2023