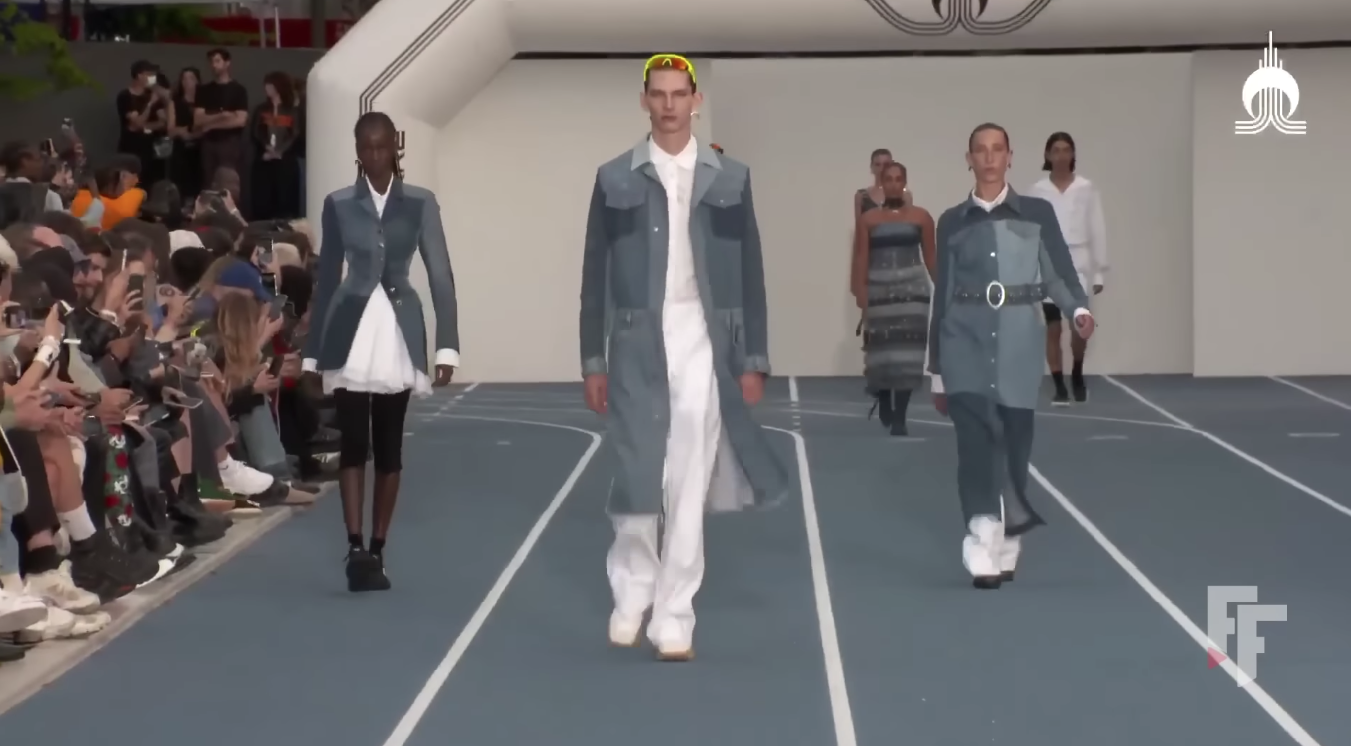 Held in the open-air grounds of the Gobelins Tapestry Workshops in central Paris, the show opened with a sweater depicting a vibrant sunset. It was paired with dark shorts and neoprene sandals, a teasing nod to the rain-threatening Parisian sky. (See the show here: https://www.youtube.com/watch?v=jwpspO5b6tw)

There is a succession of minimalist pants and shorts, but also jackets in lilac, pink and orange technical canvas, straight zipped jackets and cashmere high-neck sweaters.

Models casually wore the brand’s Haut à sling bags, the ancestor of the iconic Kelly and Birkin handbags, which seemed to sprout at the end of their arms.

Originally designed in the early 20e century for carrying horse saddles and riding boots, the brand’s bag took on a more contemporary twist with a distorted checkered pattern.

Véronique Nichanian, at the head of the men’s line since 1988 — an eternity in the constantly changing world of fashion — sought to convey a “feeling of lightness that makes you float in the sun”, as described in the show’s notes.

Models paraded in a straight line as a breeze tugged at the loosest of styles, blowing the tails of silk scarves into the air and adding drama to the evening spectacle.

“I think when you put on white jeans with a black sweater and a pair of sandals, you’re maybe closer to the French dream than the extravagance we see,” designer Pierre Maheo told Reuters, describing her approach to fashion. . “You can’t just have things that are all over the podium.”

Founded by Mr. Maheo a decade ago, the brand has quietly gained a loyal following and has recently joined a wave of French brands opening stores in the United States, including Ami, which held a fashion show at the foot of the Sacré -Heart. Basilica earlier this week.

Officine Générale is one of the regulars on the Paris Fashion Week calendar known for its more intimate crowds.

DIOR
Dior on Friday transported its audience to a seaside garden between Normandy and Sussex for its latest men’s collection, aristo-chic with a utilitarian look. (See the show here: Dior Homme Spring-Summer 2023 show at Paris Fashion Week #PFW #SS23).

Celebrities such as model Naomi Campbell, Hollywood couple Justin Timberlake and Jessica Biel, ex-soccer star David Beckham and rival designers Olivier Rousteing of Balmain and Matthew Williams of Givenchy sat on real grass, with the rest of the guests, surrounded by wildflowers.

Dior menswear artistic director Kim Jones set up the show in a makeshift space in central Paris for the show during Men’s Fashion Week. The podium transformed into a lawn of purple, orange and pink flowers, with a painted sky-blue panorama and a life-size reproduction of Christian Dior’s pink house in Normandy.

It faced a reproduction of a country house once frequented by the Bloomsbury Group, a collective of British writers, intellectuals and artists of the early 20e century which are often cited by Mr. Jones as an influence.

The first model kicked off the show in a monochrome look that paired a beige suit with a very sporty backpack — illustrating Mr. Jones’ style of mixing sharp tailoring with streetwear.

The work of Bloomsbury painter Duncan Grant has been reproduced on knitted sweaters and technical fabrics.

More for style than sun protection, some models paraded with caning hats, an openwork grid dear to Christian Dior that can also be found on the long quilted blue and khaki green coats.

First, a team of male and female models wearing swimsuits made from recycled fibers that blended into the body, framing the curves. Then came a collection of recycled denim silhouettes with impeccable patchwork. To add color there was a series in pink, including a Chanel-like twinset – but made with towel fabric.

Former Liverpool striker Djibril Cissé, 40, with a football in hand, wore a floral shirt and cropped ensemble, while French actor Joey Starr, 54, strutted around in leather trousers paired with a zipped jacket with a jewel print.

In addition to the usual guests from the fashion industry — customers, journalists and influencers — 900 tickets were distributed online, reservations were granted on a first-come, first-served basis. Tickets sold out in seconds.

“It’s critically important to Marine Serre to be truly inclusive, ensuring our designs and experiences are accessible to everyone,” the label said in show notes released to media.

“What a crazy opportunity – a nice present – she suggested it to us,” says Carolina Bourassi, 20, a visual arts student. “It would be nice if other brands did the same. It’s not like YouTube or Instagram,” she added.

After the show, guests were offered drinks to celebrate the brand’s sixth anniversary and enjoyed an outdoor party.

One of the industry’s young rising stars, Ms Serre, 30, has won numerous fashion awards, including the LVMH award, presented by Rihanna in 2017.

LOUIS VUITTON
Louis Vuitton turned up the volume during Paris Fashion Week on Thursday, dragging Florida’s famous Marching 100 group to the heart of the Louvre to launch a runway show for its latest range of colorful menswear styles – in honor of the late popular designer of the brand, Virgil Abloh. (See the show here: https://eu.louisvuitton.com/eng-e1/magazine/articles/men-spring-summer-2023-show-paris# ).

“Virgil, long live Virgil,” intoned rapper Kendrick Lamar, seated next to model Naomi Campbell on a bright yellow track – an exploded toy racetrack that wraps around a cobblestone courtyard with a fountain running down the center.

Performers from the Florida A&M University band twirled flags to the sound of brass, breaking into dance moves before leaving the floor in formation, clearing the way for the models.

At the end of the show, the models made a light stripe of pastel rainbow fabric, reminiscent of Abloh’s first Paris show for the brand in 2018 which he held on a rainbow catwalk, symbolizing its approach to diversity.

Abloh, fashion’s most prominent black designer, died last year at 41 after a battle with cancer. He was known for drawing inspiration from the streets and cementing the arrival of streetwear into the high-end fashion world.

AM I
Micro shorts, waders, marinières and oversized coats paraded during the Ami womenswear and menswear fashion show on Thursday at the foot of the Sacré-Coeur basilica, as the French brand sought inspiration in classic Parisian chic with a bold twist. (Watch the show here: https://www.amiparis.com/ph/ ).

For a more festive look, one model shimmered in black sequined pants with a matching bikini top while another walked the runway in a sheer A-line dress.

Skirts were mini, pleated or in a blue gingham pattern, and slung over the shoulder.

By pairing sneakers, joggers and leather jackets, Ami has maintained its laid-back approach to fashion.

One of the highlights of Ami’s show was the final outfit, worn by 1990s model Kristen McMenamy in an all-red look. — Reuters

The collection of expert Antiques Roadshow, and Chanel, Louis Vuitton and Gucci items, among the auction items to be won