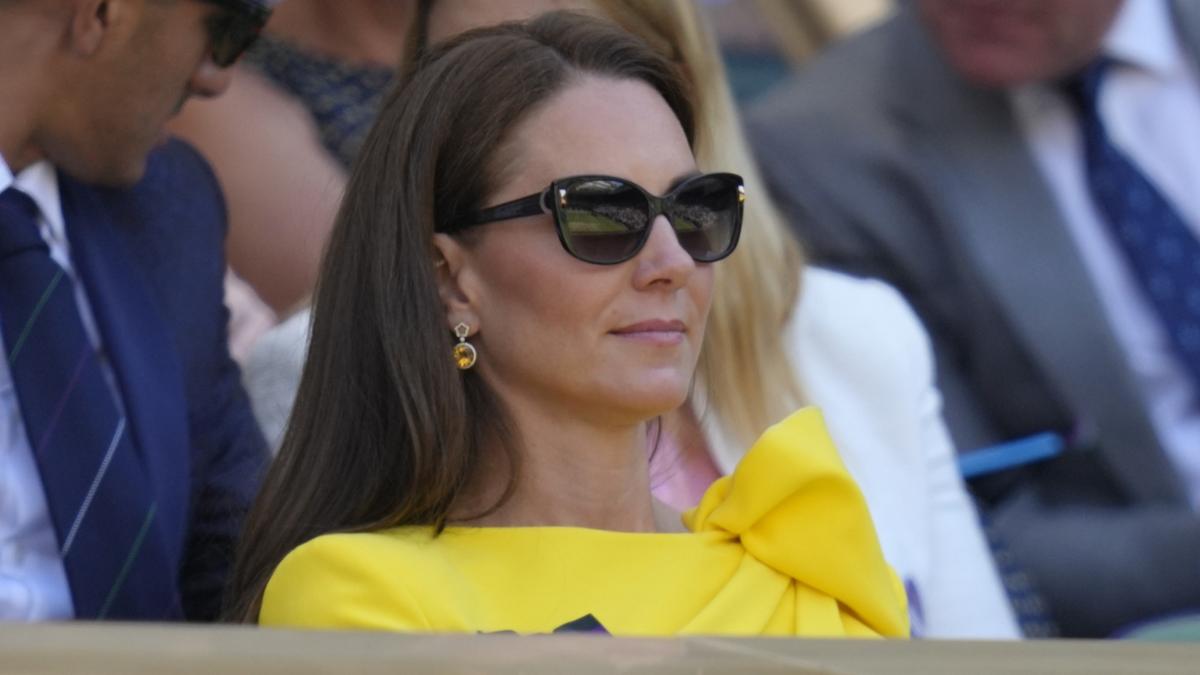 For two years, she has succumbed to the coronavirus, but yesterday Wimbledon welcomed a spike in yellow fever brought by the Duchess of Cambridge.

In scorching temperatures, Kate – wearing a brightly colored £1,570 Roksanda dress which she first wore on the Caribbean tour in March – gasped, clapped and clapped as Elena Rybakina won the coveted women’s singles crown on center court.

The Duchess, who paired her dress with $4,700 Kiki McDonough Eden Citrine and Diamond Flower Drop earrings and a $520 pair of Bulgari sunglasses, was captivated by Tunisian Ons Jabeur, 27, the first Arab or African player to reach a Wimbledon final, won the former ahead of his 23-year-old opponent propelled to victory, 3-6, 6-2, 6-2.

Still, the result offered a potentially awkward moment for the Duchess as Moscow-born Ms Rybakina escaped a ban on Russians playing at the tournament because she switched to represent Kazakhstan in 2018.

Yet the Duchess – patroness of the All England Club – handled the situation deftly by presenting the Venus Rosewater dish to Ms Rybakina, who still lives in Moscow, and gently patting the new champion on the elbow.

While her sister Anna was there, her parents did not visit Britain, although she thanked them in her post-match center court interview without mentioning her native Russia.

“My sister is here and it’s only the third time she’s come to see, so I’m glad she’s here. Without my parents, I definitely wouldn’t be here,” she said.

The Kremlin propaganda machine, however, is likely to claim its SW19 victory.

And before the match, Shamil Tarpischev, President of the Russian Tennis Federation, said: “It’s good that Elena is playing the Wimbledon final. She is our product. Of course, we will encourage him.

Ms Rybakina insisted she could not be blamed for her birthplace. “I represent Kazakhstan and I can’t choose where I was born,” she explained.

As the match, which lasted an hour and 48 minutes, swung around, the Duchess had to hide behind her schedule during the big on-court drama.

Among those who joined her in the Royal Box were actor Tom Cruise and costume designer Heather McQuarrie, Killing Eve star Jodie Comer and singer Ellie Goulding.

The Duchess’ parents, Michael and Carole Middleton, were in the stands, as were Australian actress Rebel Wilson and Downton Abbey’s Dame Maggie Smith.

The Duchess will be back today with Prince William to watch Novak Djokovic seek his fourth title in a row, against Nick Kyrgios.

And while the memories of her maiden Grand Slam title will never leave her, Ms Rybakina was forced to admit: “Kate congratulated me and said I played very well. But I was so shocked that I think I forgot what she said.