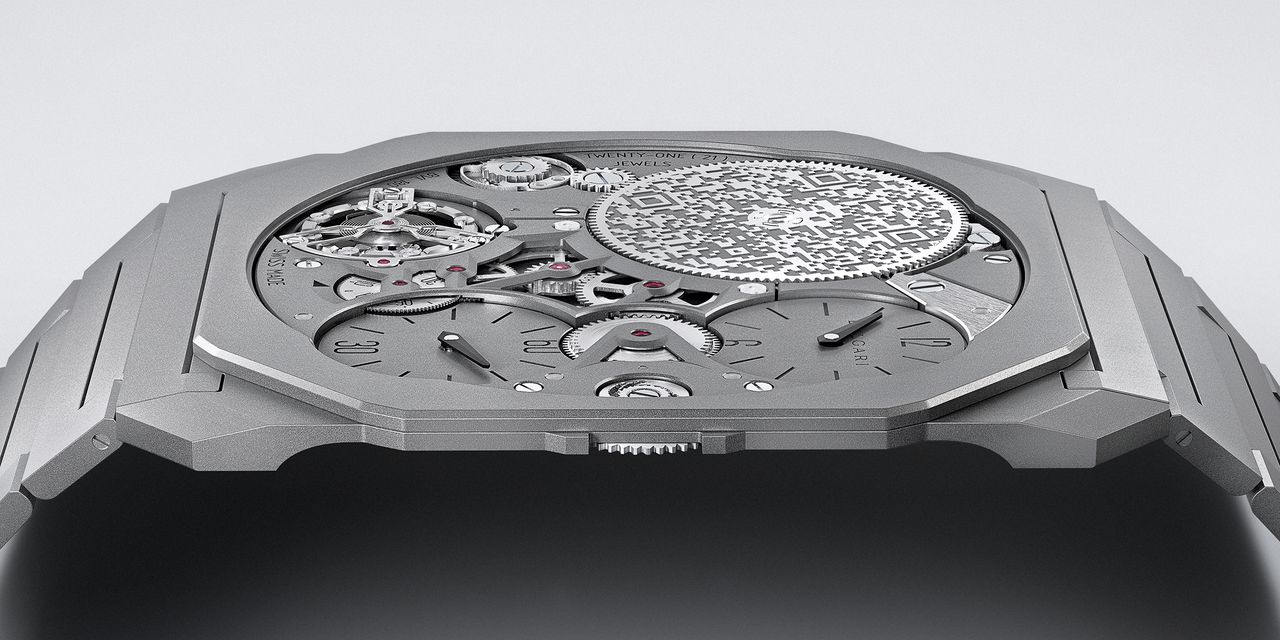 Bulgari celebrated the 10th anniversary of its flagship Octo men’s collection on March 21 in Rome with the unveiling of its most radical ultra-thin watch ever, the Octo Finissimo Ultra. Measuring just 1.80 mm thick, making it the thinnest mechanical watch in the world, the Ultra achieves the brand’s eighth world record in the specialty of ultra-thin watchmaking and surpasses the former record holder, Piaget’s Altiplano Ultimate Concept 2018 watch at two millimeters thick.

Limited to just 10 pieces, the Octo Finissimo Ultra (€400,000, approx. US$440,000) was presented with Rome’s ancient Pantheon as its backdrop. Not only is the Octo Finissimo Ultra incredibly thin, measuring slightly thicker than an American quarter coin, but it also breaks new ground with an unprecedented technological dimension that bridges the traditional world of mechanical watchmaking with the digital world.

A QR code is engraved on the ratchet wheel, visible on the dial side. All 10 original purchasers of the watch will receive an exclusive NFT artwork, which conceptualizes the Octo story – complete with interviews, production details and a deep 3D dive into the movement – and guarantees the authenticity and uniqueness of the watch. watch with blockchain technology. The two authentication certificates, one for the artwork and the other for the watch, will be linked, taking the watch beyond the physical world.

“Can we do it? As soon as the question was asked three years ago, our teams answered: how are we going to do it? Antoine Pin, managing director of the Bulgari watch division, said in a press release. “This ability to take up challenges is rooted in the brand’s DNA. As for the word ‘ultra’, it expresses this desire to go beyond the limits, to play with extremes, an idea that we adore internally!”

Indeed, the Octo Finissimo Ultra goes beyond its record-breaking predecessors with eight patent applications for the assembly of the watch crystal, the barrel structure, the oscillator module, the differential display, the modular structure, the bracelet, the bimetallic case middle-plate-back of the case and the software.

The 40mm sandblasted titanium watch further expresses its iconoclastic nature with an unconventional time display, separating hours, minutes and seconds. True to the aesthetics of the collection, the display of the seconds on the wheel at 6 o’clock is off-center in relation to the hours and minutes, which are indicated on two regulator-type counters.

To gain micro-millimeters, the engineers used the caseback as a plate on which the 170 components of the manual-winding BVL 180 caliber are integrated.

To ensure the rigidity of such a thin case, tungsten carbide, a particularly dense, hard and ultra-resistant combination of carbon and tungsten, has been used for the caseback and mainplate.

Reducing a mechanical watch to such a bare minimum requires not only streamlining essential components, but also redesigning their functions to take advantage of multitasking where possible. In an ordinary watch, a component may perform a single function, whereas an ultra-miniaturized watch may require a component to perform multiple functions. For example, the Ultra’s dial not only shows the time, but it also holds the other components in place.

The crown posed another challenge, as a conventional crown sized for a 1.80mm thick watch would be too small to be user-friendly. Instead, the crown has been replaced by two horizontally placed buttons, one for winding and the other for setting.

In a quest for ultimate finesse, the functions of the watch are built on the same horizontal plane, while an ingenious differential mechanism manages the time setting without disturbing the gear train.

The project involved three years of research and development by several technical teams at Bulgari in the Vallée de Joux and Neuchâtel, as well as at avant-garde movement development specialist Concepto in La Chaux-de-Fonds. .

“We had to break the rules not only in terms of designing the movement, but also the case, case back, bracelet and folding clasp,” said Fabrizio Buonamassa Stigliani, Executive Director of Product Creation at Bulgari. , in the press release. “To achieve this degree of thinness, you not only have to review your way of thinking, but also call on a wide range of skills, play with multiple materials and adapt to a multitude of new constraints.

Bulgari also celebrated 10 years of Octo with special anniversary editions of the Octo Finissimo Automatic (€15,600) and the GMT Automatic Chronograph (€18,200). Each 40mm titanium model is limited to 200 pieces.