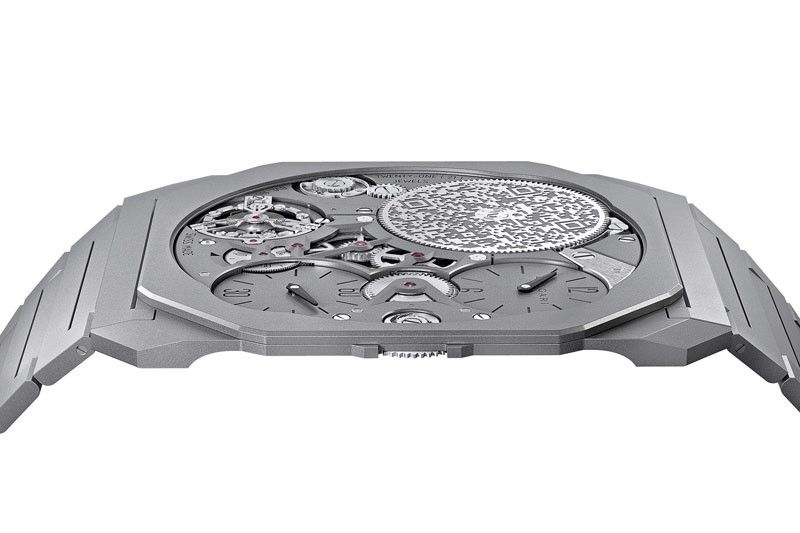 The story of the 1.8 mm thick Bulgari Octo Finissimo Ultra can be told in eight. After seven consecutive world records and more than 60 international awards, Octo Finissimo pushes the boundaries of feasibility by winning Bulgari’s eighth world record as the thinnest mechanical watch ever made – thinner than a Philippine peso coin at 2.05mm. Don’t let its size fool you; made of sandblasted titanium, it is both light and strong.

The watch encompasses no less than eight patents: the assembly of the watch crystal, its bracelet, its barrel structure, its oscillator module, the differential display, the modular structure, the bimetal case middle-plate-back and the software.

The octagonal case that is the Octo’s design code is inspired by the geometry of the eight arches of the Pantheon, in an encounter between cutting-edge Swiss watchmaking innovation and the quintessence of Italian design. (Did you know that Bulgari is the first Italian company to have won the prestigious “Aiguille d’Or”, the Best in Show prize at the Grand Prix d’Horlogerie de Genève 2021?)

Eight when turned sideways draws the shape of infinity – this is to come from the Octo collection, now celebrating its 10th anniversary. 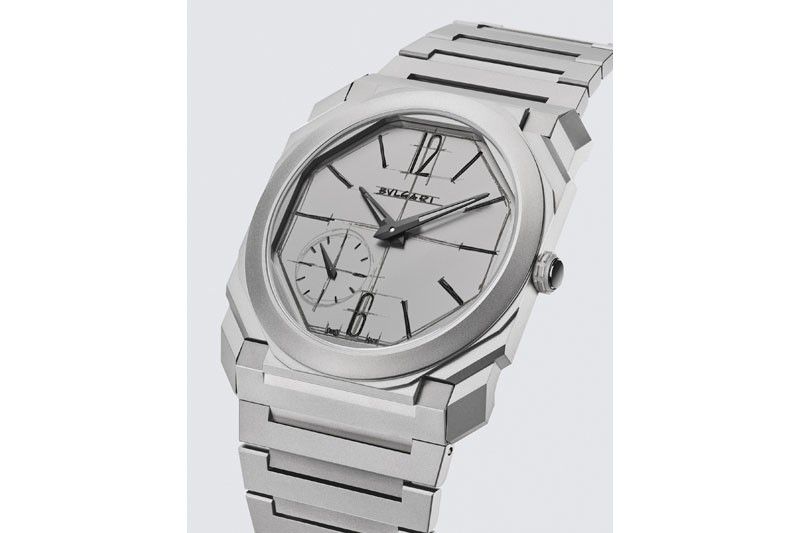 Zooming in on an Octo, you see that each side is a 45 degree angle, coming from part of a square – a square like a QR code. This is what is engraved on the ratchet wheel of the barrel of each of the 10 limited editions.

At a time when a watch is not essential for telling the time and a new realm of the digital world (“the metaverse”) is set to be as valuable as the tangible, Octo Finissimo Ultra has been designed in a unprecedented collaboration with manufacturers, watchmakers and the studio – from start to finish – as a gateway to an entire global ecosystem that Bulgari has filled with an ever-changing selection of experiences. The watch even comes with a unique NFT artwork.

In 2016, the Octo Finissimo Minute Repeater was the thinnest chiming watch on the market. Today, Bulgari is revisiting it in sandblasted titanium with an openwork matte blue dial and a structured rubber strap.

The new Octo Finissimo Chronograph GMT Automatic is an all-steel reinterpretation of the famous GMT automatic chronograph launched in 2019 with a world record thinness of just 3.3 mm, making it the thinnest mechanical chronograph ever made.

In 2020, Bulgari achieved its sixth consecutive world record achieved by the Octo Finissimo Tourbillon Chronograph Skeleton Automatic. Its self-winding skeleton movement with monopusher chronograph and tourbillon functions is housed in a thickness of just 3.5mm, now in platinum with a matching alligator strap.

This is the original sketch of the Octo Finissimo, laser-engraved on the dial, as if drawn by Bulgari’s executive director of product creation, Fabrizio Buonamassa Stigliani himself. A humorous and tongue-in-cheek tribute to some of the world’s breakthrough technologies, it’s a reminder that time is always in our hands.

In the Philippines, Bulgari is located in the new Greenbelt 3, Esperanza Street, Makati and The Shoppes at Solaire, Aseana Avenue, Paranaque.