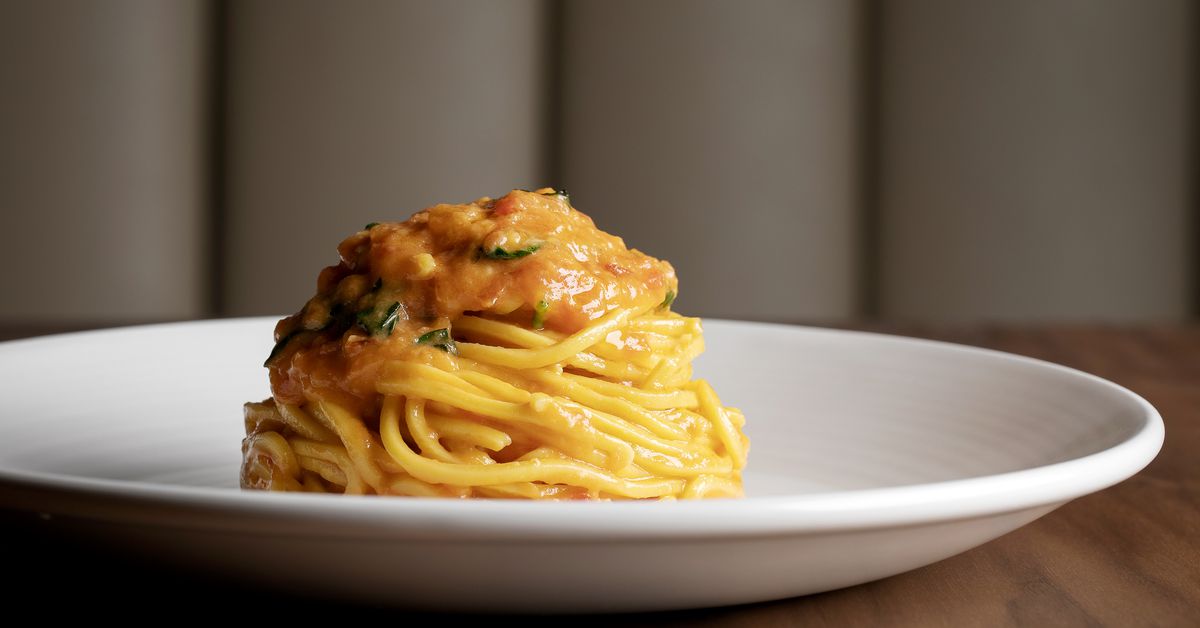 The race for the White House has started in earnest this week, so it may be fitting that Grace Dent kicks off with a visit to The new restaurant adjacent to Robin Gill’s U.S. Embassy, ​​Darby’s.

What she finds is nothing less than a “culinary bear hug”. From a “menu you might whisper in someone’s ear as a niche form of ASMR therapy,” highlights include a “decadent and airy” chicken liver mousse with a Jerusalem artichoke “jam.” “unforgettable” truffle; “heroically good” monkfish fillet, and the increasingly ubiquitous homemade riff on candied potato: “thick, crisp, Sponge Bob SquarePantsslices of paradise in the shape of an accordion ”. The service is “fast”; “excellent”; “Knowledgeable”: count on “dim lighting” and this is a restaurant “to keep up your sleeve for a multitude of contingencies: crowds, dinners for clients and evening get-togethers. Darby’s “winning formula” may be worn out, but here she “never gets bored.”

The offer is more direct at the Guinea Grill in Mayfair, where Tim hayward find a cooked breakfast for the ages. Admirably, it starts with a bonus plate of demonic kidneys. each organ “fried precisely to its rosy-hearted peak, not simply” demonized “but personally thrown by Baphomet into fiery boiling oils”, before the main event arrived. All the usual suspects are present and correct: “fondant” black pudding; “spectacularly tasty” sausages; fried egg, “lace on the edges of the fryer”; bacon, “less reckless than a modest steak, with a substantial layer of fat”; fungus, “for health”. Taken together, this is enough to leave any reviewer “wailing quietly”, but there is something so “grossly extra” about all of this that amid the agony there are also “transports of joy”. Hayward believes that in a world where “lawyers have undermined our resolve” it can make it seem like “the ceremonial breakfast is in danger.” Here, at least, he finds “hope”.

“Give up hope to all who come in here” might be an appropriate slogan for Marina O’Loughlin’s destination this week. Sette, the new Italian at Bulgari Hotel, Knightsbridge, is “an expensive failure” in every sense who “bends to his audience” of super-rich with dishes like “susci” and crudo “erased by any branch of Nobu-value of extras -truffle preserved, ginger, taggiasca olives, pesto.

Everything on the menu is “exaggerated”, swollen with “luxury signifiers” that make each dish actively “mean”: shortrib is accompanied by farro “risotto” “stripped on the plate with all the finesse of a disgruntled dinner lady. “; the ravioli with duck and foie gras “infiltrate a grainy beige glue” and arrive with “a too small and sickly fillet of marsala scribbled on top”. The main courses, too, are “as over-accessories as a prostitute at the Grand National” – puddings, “ditto”. Black Cherry Tartufata is’ grainy ‘and’ tasteless’, covered with splinters of ‘crispy milk’ and submerged in ‘sweet corn cream’ – it’s hard to say ‘whether to eat it or wear it like. a fascinator ”.

It may be “naive to expect anything resembling value in this most rarefied pass of the woods”, but O’Loughlin emphasizes the true “exhausting … innocuous opulence” . She finds no personality, no spark, nothing: it could be “any expensive faux-Italian restaurant in any expensive mall in any city, anywhere.”

For a similar bill – but much better food – head instead to Bob Bob Cité, which has been brewing for almost two years but increasingly seems worth the wait. Gilles Coren follows in Grace Dent’s footsteps this week, and is also delighted with Eric Chavot’s cooking. This being the city, there are plenty of “stupid caviar and truffle-cooked oyster options”, but it’s also possible to browse the menu and find “a pretty wonderful classic French lunch”. Start with a “superb” onion soup, topped with a “large cheese flank with a Comté crouton”. Upgrade to a “delicious, rich, tarragon” pie with chicken, morels and sauternes, perhaps with a side of “fatty and angry macaroni and cheese with its golden crispy crust”. End with “a floating island for the ages”: you’re done. Followers of French regional cuisine are not necessarily Bob Bob’s target audience, and it’s an open question how much ‘krug-swilling revelers’ will appreciate this quality of cuisine, but then the hell of the Brexit continues to burn, “Bob Bob La Cité will be as great a place as any other place to sit and watch the end of the world, especially if it ends before they bring in the check.

Another long genesis in Holborn: it was in May 2017 when Gezellig appeared at the Marylebone Culinary Incubator Carousel; fast forward more than two years and his search for a permanent site is finally over. Through Jimi Famurewa, co-founders Witeke Teppema, James Comyn, Rebecca Mascarenhas and Graham Long have come up with “a space of hell”: “a room of 50 place settings with high ceiling and lined with benches painted a refreshing sage, sprinkled with drained wine bottles and already in possession of a clubby and inhabited air.” The cuisine is equally eclectic – “a joyous collection of ideas and culinary influences, all anchored – for the most part – by precise Michelin-quality cuisine”.

Sometimes, the (sur) family of the red guide can make things a little harmless, and it is sometimes the case here: the courgettes in trumpet are “carefully grilled and garnished with curd of sheep, broad beans, a puree of green beans with mint ”but need“ a little spiciness or even acidity to fight against all the slightly passive and green freshness ”. Likewise, poached plaice with potato, leek and buttermilk is both “expertly made” and “a little note, in terms of taste”.

The considerable know-how of the kitchen is also reflected in a “breathtaking joie de vivre” in its purest form. The braised turnip is quite simply “a stormer”: the vegetable “perfectly cooked” and “garnished with wonderful duck hearts and livers draped in sorrel”. The accessories are equally successful with a main dish of lamb, a “blushing” fillet “swarmed with incredible things like herbal mash, plumped capers and a roasted tomato taken to an unexplored realm of deep and radiant sweetness”. And even if a black cherry and closing chocolate savarin is “strangely dense”. Famurewa sheets converted. With his promise of abundant “wine-less mischief”, Gezellig adorns his new home with a “sprinkle of sweet, grown-up magic.”

There’s a different kind of watering going on in Mayfair, because David Sexton take the opportunity to relieve yourself generously everywhere in the “contemporary luxury French bistro” Les Platanes, at an extremely disappointing and impactful price.

Despite the timing of the Standard Evening replacing and sending him free foie gras, the kitchen seems unable to do anything else properly. The lobster salad with fennel and nectarine is “tasteless, a silly little dish, the fruit slices are an unnecessary ‘southern’ addition to a few unremarkable pieces of lobster.” In addition to being “grainy”, marinated clams “almost worryingly” lack basic “freshness”; a similar affliction strikes a piece of turbot, “so tired that it has lost its native good taste.” Scallop and crab pelmeni are “thick and rubbery”; the lemon sorbet with Armagnac and lime zest is “too raw and acrid to finish”; a £ 11.50 cheese course includes ‘two small pieces of a sharp blue cheese’ and a ‘half-moon’ of ‘hard and tasteless’ Saint-Marcellin. When a side dish of vegetables – in this case the stuffed artichoke barigoule that accompanies turbot – is the best thing about a meal, things probably aren’t going 100% as expected; after the recent raves hosted by neighboring Emilie, it is a salutary reminder that “the rich don’t always have it well”. Far from it in fact: at the Platanes, everything is “mediocre or worse”.


Register to receive the newsletter

The new trend in perfumery: Personalize & create your own perfume