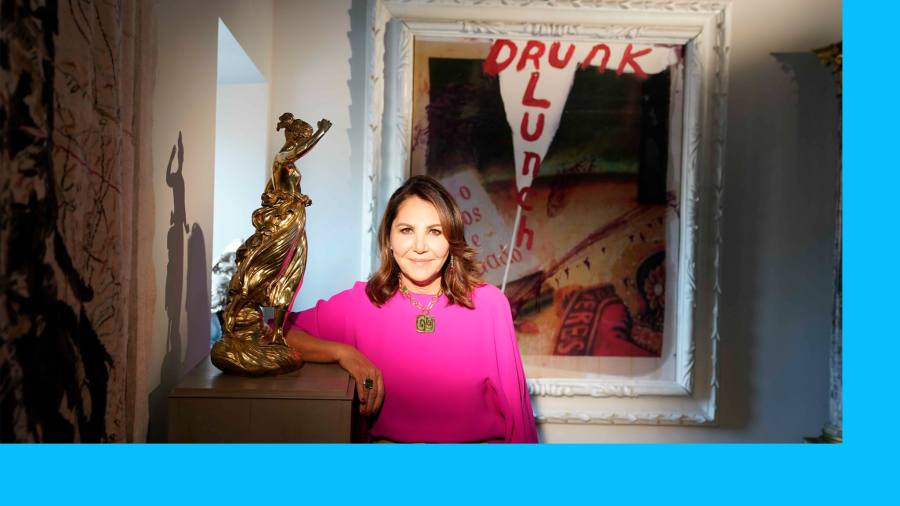 Beatrice Bulgari and her husband Nicola have two art collections. One is split between their multiple homes – in New York, Rome, Paris and Sicily – and ranges from Bellotto to Cy Twombly, Michelangelo Pistoletto and William Kentridge.

The other, created by Beatrice alone, “is about this size,” she laughs, spreading her hands wide. And that’s because it consists of about 180 films that she commissioned from artists and put into a new nonprofit foundation. “I’m so excited, we’re having our first exhibition of selected videos during the Venice Biennale,” she says.

Bulgari, who is in London on a trip to work with the foundation’s artistic director Alessandro Rabottini, is eager to talk about the creative process – she herself has been a costume designer for films, including the Oscar-winning film Cinema Paradiso (1988) — and the reasons why she created the Fondazione In Between Art Film. The unwieldy name reveals the game: it’s up to artists to create works that fall between these two forms.

“Even as a child, I was very artistic,” she says. “I was raised in Syracuse, Sicily, and my mother was a writer, my father an antiques dealer. I’ve always been artistic – at age nine I stole sheets of paper from my mother’s typewriter for my watercolours.

Seeing his interest, his mother sent him every afternoon to work with a local artist. “I was very shy, rather melancholic as a child,” she says, though now she seems outgoing and friendly. “My whole family went to traditional schools where they learned Latin and Greek, but I was considered the black sheep of the family. . . Very early on, I decided to study scenography and specialize in costume design. I wanted experience and so I went to Rome.

She fell into the world of cinema and theater and worked on the costumes of many films, including Stanno Tutti Bene (Everyone is fine, 1990) with Marcello Mastroianni, Una Pura Formalità (A Pure Formality, 1994) and The Uomo delle Stelle (The Star Maker, 1995). It was while working on Cinema Paradiso that she met Nicola Bulgari — grandson of the luxury brand’s founder — during her first marriage. Bulgari was sold to conglomerate LVMH in 2011 for $5.2 billion and Nicola remains the company’s vice president.

“Nicola had given me jewelry, but I didn’t know what to give back. We had traveled together for a year and I had a collection of matchboxes we had bought together, and while having dinner with artist Alighiero Boetti he offered to turn them into a work of art. Boetti photocopied them and created a collage with their names. “Like many collectors,” says Bulgari, “every work of art connects to a moment in your life. But I only started to feel like a collector after my marriage to Nicola; art connects and is part of our life together.

Her husband was already a collector, especially of vintage cars, but also of art and antiques, so when Bulgari designed the costumes for a 2009 production of Euripides’ play Medea in Syracuse and was inspired by the ancient representations of Lawrence Alma-Tadema, Nicola bought him the Balneatrix. He also bought older works like that of Bellotto People’s Square, Rome and contemporary pieces such as Damien Hirst Emperor Maximilian (2007). “At first I wasn’t so sure about the Hirst, but this is a diamond – and of course [Nicola] is in love with gemstones,” she says.

Because of her film work, it was video art that she fell in love with. In 2012, she created a production company, In Between Art Film, which joined forces with Tate in London, Maxxi in Rome and documenta 14 in Kassel, then became the foundation in its own right. “It’s my special vision, it’s very personal,” she says. “I met the Italian artistic duo Masbedo and we started to think that it would be a great adventure to make a feature film.

“The idea was not to make them become directors, but to use the language of cinema, to let them remain artists. At that time, without really realizing it, I was ordering the films. A result was The lack (2014), which features six women in the apocalyptic landscapes of Iceland. But she adds, “When you commission, you trust the artist, but you don’t know how it’s going to turn out until it’s finished.”

Has she had any disappointments? “Yes,” she said. “Once I read a script, it was excellent, beautiful, but when I saw the finished work, I was disappointed, and I even proposed changes, but the artist refused, and I said, ‘OK, you’re the artist.’ But I never worked with her again. Everyone loved her, however, she even got awards. Which shows that it’s something very personal.

Each video is produced in six editions, including one for the Fondazione; the others stay with the artist. Some are co-produced when the costs exceed the initial €10,000 she invests in each project. “I don’t own these videos, I don’t need to own them – they stay with the foundation, which is based in Rome, where we have a team of seven to manage it.” She also has a scientific program of recording and archiving the work of art: “I foresee this continuing, after my own life.”

The Venice show is called Penumbra and will feature eight new video works by artists including Afghan Aziz Hazara, Chinese He Xiangyu and Brazilians Ana Vaz and Jonathas De Andrade. “Films are about visibility and opacity, truth and fiction, memory and history and the title, Penumbrashows how these can become blurry.

“They were ordered before the horrible situation in Ukraine, this terrible moment of instability, but they are so relevant today. Our artists come from all over the world and it’s important to show their different looks, how that look can be a filter for reality.

And at the end of the interview, she emits a collector’s mantra: “Always follow your heart – never think about the market value of the works you acquire or commission!”

‘Penumbra’ runs from April 20 to November 27 in Venice, inbetweenartfilm.com